Police on uniform patrol located Beverly Kimber at Jonas park.  Police observed 4 blue baggies of what appeared to be drugs in Kimber’s possession.  Kimber was arrested for possession of an illegal substance and brought back to the police station where she attended court.  *13054

While on general patrol police located a 56 year old male wanted by the St. Thomas Police.  The male was arrested on the strength of the bench warrant.  The male was released with a future court date. *13056

On Wednesday August 17, 2022 the victims contacted police to advise that their apartment on Talbot had been broken into.  The suspect had cut a hole from an adjoining unit into the apartment and stole numerous items from the apartment. No one is currently residing in the adjoining apartment.   Police are looking for any information relating to the break and enter at  537 Talbot.  Please contact St. Thomas Police at 519-631-1224 or Crime Stoppers. *13075

On August 17, 2022 police responded to a motor vehicle collision, fail to remain, at Elgin and Centre.  A vehicle traveling west bound on Centre struck the victim on the drivers side door and then fled the scene.  The vehicle is described as a blue PT cruiser with a male driver possibly in his 70’s.  The vehicle will have front end damage.  If you know of the person or have any information please contact police at 519-631-1224 or Crime Stoppers.  *13082

A 32 year old male is in custody after police located the male near his residence in the early morning hours of Thursday August 18, 2022.  The male was at large with several bench warrants with St. Thomas Police Service and was arrested on the strength of the the warrants.  Search incident to arrest police located a weapon on the male.  The male was subsequently charged with several breach of weapons prohibition.  The male is held pending court. *13107

Police located a bike at the rear of a business on Wellington Street.  Bicycle is a lime green and teal Avigo bike.  If this belongs to you please contact police at 519-631-1224. *13053 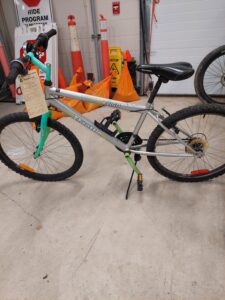