Police are seeking assistance in identifying this male who stole gas from a local gas station on October 9th. He was the passenger of a black Ford pick-up truck with a topper that had stolen licence plates attached. This truck was also involved in a Break and Enter that occurred on the same day in the industrial zone. If you have any information about this male or the incidents mentioned, please contact the STPS or visit www.stthomascrimestoppers.ca. Please refer to incident ST22016576 (gas drive off) or ST22016519 (break and enter). 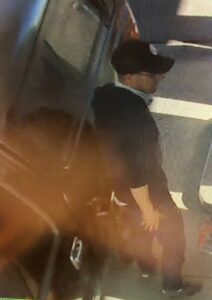 A St. Thomas resident located a bicycle on his property and turned it over to police. It is a green and grey Trek 3700 mountain bike. If this is your bike please contact the STPS and ask to speak with Property Officer, Special Constable Scott Haayema. Refer to incident ST22016566.

Shortly before 5am this morning Police located 42 year old Kevin ASHFORD in the downtown core. ASHFORD was wanted by the STPS for a Break and Enter incident that occurred at the end of September. ASHFORD was arrested without incident and transported to the Colin McGregor Building where he was processed and later released with a future court date. ^15831/ 16620

Mid-day on October 11th, members of the Community Resource Team observed 33 year old Brooks FERRIS in the downtown core. FERRIS was wanted for Theft Under $5000 after being captured on video stealing parts from a bicycle parked in front of Walmart. FERRIS was arrested on the strength of the warrant and transported to the Colin McGregor Building where he was processed and later released with a future court date. ^15483

Mid-day on October 11th Police responded to a St. Thomas residence for reports of a domestic dispute. Through investigation, police determined a 34 year old female had assaulted her partner with a dinner plate and kitchen knife. The female was charged with two counts of Assault with a Weapon and taken into custody without incident. She was transported to the Colin McGregor Building where she was processed and later released with a future court date. ^16574

A warrant has been issued for 26 year old Philip ZELLMAN Jr of St. Thomas after he failed to attend court to answer to a long list of offences including Assault, Uttering Death Threats, and Breach of Probation.

A 41 year old St Thomas man is wanted by police for breaching his curfew imposed by the courts after being charged with numerous property crime offences. He is wanted for two counts of Fail to Comply with Release Order. ^16613

Sometime over the Thanksgiving long weekend, a portable at Locke’s Public School was broken into and a Lenovo ThinkPad laptop was stolen. Entry to the portable was made by breaking a window. If you have any information about this incident please contact the STPS at 519-631-1224 or visit www.stthomascrimestoppers.ca. Please refer to incident ST22016552.

Two vehicle entries occurred overnight on Monday October 10th, one on Forest Ave and a second on Bridle Path. In both instances, the vehicles were unlocked. Please remember to lock your vehicles and take all valuables inside. If you have any information about this incident or saw anything suspicious in the area please call the STPS or visit www.stthomascrimestoppers.ca. Please refer to incident ST22016567 (Forest Ave) and ST22016568 (Bridle Path).

At approximately 3:30pm on October 11th, a local resident was shopping at the downtown Shoppers Drug Mart and accidentally left a shopping bag near the check-out. The shopper realized the mistake shortly after but the bag was already gone. It is a Mugfords bag and it contained a new pair of ladies ankle boots. If you have any information about this incident please contact the STPS or visit www.stthomascrimestoppers.ca. Please refer to incident ST22016592.

A St. Thomas resident is out $1000 after falling victim to a scam. The resident received an email from who he believed was the president of a local organization. The scammer requested the victim purchase ten $100 Amazon gift cards and send the codes via email. The resident complied with the request and later learned the email was fraudulent. Scammers are becoming increasingly sophisticated and believable in their approach – the STPS reminds you to be wary of requests to send gift card codes and to confirm with the email sender verbally before sending any funds. ^16605