An arrest warrant for 28 year old Terri-Lynn Auckland is being sought after it was alleged that she failed to report to the John Howard Society on Wednesday.  It is alleged that, as a result of her release from custody and conditions attached, that she report to the society on a given date and time.  Her whereabouts are unknown at this time.  If you see Auckland or know her whereabouts please contact the St. Thomas Police.

On Thursday morning an observant Malakoff Street resident, contacted police when he witnessed two unknown males entering a residence (previously damaged by fire).  These males used an extension ladder that was nearby and gained entry through a window on the roof.  Both males were subsequently located nearby by  police.  As a result of the investigation, there was no new damage reported and nothing had been taken from within the residence.  Both males were deal with via the Trespass to Property Act.

A Southwick Street resident awoke Thursday morning to find that a Blue Spruce Tree had been cut and removed from her yard.  The Blue Spruce, likely taken as a Christmas Tree, was cut down shortly before 3 am, as video from a nearby residence showed two individuals carrying the tree away from the property.  Police continue to investigate this matter.  If you have information relating to this incident please contact the St. Thomas police, or Crime Stoppers.

A male and female companion are being sought after staff at a local Walmart contacted police following a theft.  The male and female were observed leaving the front doors of the business each pushing carts full of merchandise.  The male is described wearing a black ‘Puffy’ style coat, blue jeans, white sneakers, brown curly hair, thin build wearing a red/brown baseball cap backwards.  The female is observed wearing a black coat, black ballcap with long black hair tips died blonde.  The value of the merchandise taken is undetermined at this time and assistance in identifying the two is being requested.  Images of the individuals were not available at the time of this release.  More to follow.

A 48 year old St. Thomas has been charged with Impaired Operation following a traffic stop early Thursday evening.  The man had been operating his vehicle on Talbot Street when he was stopped by police.  As a result of his arrest the male was brought to the station where he completed two breath samples.  The results of the samples were 120 milligrams of alcohol in 100mL of blood and 100 milligrams of alcohol in 100 mL of blood.  The male was later released from custody with a future court date.

Police are investigating after an Elysian Street resident reported their vehicle stolen shortly after midnight early Friday.  The resident awoke to the sound of their vehicle’s motor running and observed their vehicle in the laneway with an unknown male inside.  The vehicle took off from the residence after the discovery.  Stolen is a black 2004 Cadillac Escalade bearing Ontario license plate CVBW 438.  With the assistance of the OPP the vehicle was last seen travelling in the area of Mill Road and the 401 in Southwold Township.  Anyone with information about the vehicle is asked to contact the St. Thomas Police. 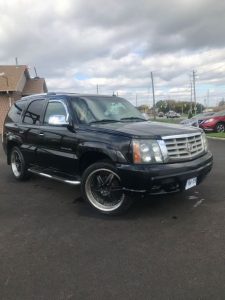