Jena WOJSZNIS of St Thomas is currently wanted for fraud Under $5000, Possession of Property Obtained By Crime Under $5000, failure to Comply With Probation Order and two Counts of Failure to Comply with Release Order Contrary to Section 145(5)(a) contrary to the Criminal Code of Canada. The charges come after Wojsznis allegedly used stolen identification to take out a loan and withdraw money. Her whereabouts are unknown but she is believed to be in the Elgin County area. Please contact St Thomas Police should you have any information. Ref #11791. 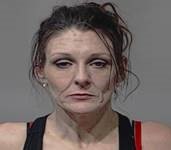 In the early morning hours of August 15th, police were called to a west end business for reports of someone syphoning gas from an industrial vehicle. Investigation revealed that a male and female attended with multiple jerry cans and stole gasoline from several vehicles. Police have identified suspects and the investigation is continuing. Ref #12921.

On August 16th, police were called to a break and enter to a south end home presently under renovations. It was learned that a male suspect had forced open a door to the home, however nothing was taken. Video surveillance has been obtained by police and the investigation continues. Ref# 12928.

As the result of a continued investigation from a theft from vehicle on August 1st, police have arrested and charged 19 year old Nicholas Derbowka, of St Thomas. Derbowka has been charged with theft under $5000 and fail to comply with probation. He was released from police custody with a future court date. Ref# 12062.

On August 15th, St Thomas Police were called to a south end establishment for a reports of a domestic dispute in progress. Upon police arrival, the male involved had left in a vehicle, however the female remained. Members of the St Thomas Police Criminal Investigations Branch continued the investigation and, as a result, have formed reasonable grounds for the arrest of a male party for the offences of assault, assault with a weapon, utter threats to cause death, point firearm and fail to comply with release order.

A warrant for the arrest of the accused is being sought and police are actively making efforts to locate the accused. Ref #12930.

On August 13th, the victim was contacted by telephone –unsolicited, by a male who stated there was suspicious activity on their credit card. They were instructed that to remove the unauthorized charges, they were to purchase prepaid MasterCard’s and provide the caller with the numbers. Unfortunately, they complied and spent $ 11 000 on prepaid cards which was in fact a scam. Police are reminding residents to be hyper-vigilant with banking information and never purchase gift cards when directed by someone over the phone. Ref #12976.

36 year old Matthew Irwin of St Thomas, was arrested last evening by officers on community patrol on an outstanding warrant. Incidental to the arrest, he was found to be in possession of Crystal Methamphetamine and cheques belonging to someone else – in contravention of a current release order. Subsequently he was charged with these additional offences and released with a future court date to answer to the charges. Ref #12978/12883.